When you dig in people’s yard for a living, sometimes you come across some strange sights. Today was one of those occasions.

At Foundation 1, we pride ourselves on doing the job right the first time. We let our work and reputation speak for itself. We rarely talk about the competition, and we won’t call out the company directly here, but the story makes an interesting point.

It is not uncommon for us to do repair work after other companies have tried to address the problem and have failed. This was the case of the job we are going to describe here. The basement had significantly bowing walls and water intrusion.  Our job was to dig out the outside wall (remove the dirt on the outside of the wall down the foundation footers enabling us to straighten the wall and waterproof it before returning the dirt. We were doing this on 3 of the foundation’s walls.)

The first two walls went as planned; no big surprises. If you work with as many homes as we do, you know when things are right and when something is strange. When we started to excavate the third wall, we noticed something was off. 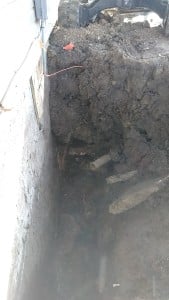 First, the dirt was compacted differently. It was more loose, but we also noticed that there was a lot of very strange debris along the outside of that third foundation wall. The debris included large pieces of concrete, other trash, and busted up pieces of granite countertops, and even a basketball hoop. What was going on??!!?!?

What we could determine was the previous (failed) foundation job had only excavated the one wall. (The situation had gotten worse, such that now 3 walls needed attention.)  But the third wall had been excavated previously, and it appeared they had backfilled the trench with debris.

Here is what should happen when you are doing a load reducing excavation and replacing it with waterproofing.  First, if there is a patio, which is often the case and was in this case, you break up the concrete and remove it. It requires big dump trucks and expensive disposition fees (at a dump), but you certainly want to get the old concrete out of the repair site.  You excavate, do the waterproofing work  (which typically includes fixing external cracks, installing a waterproof membrane, and a new footing drain pipe which is tied into a sump pump). After that, you backfill with gravel (to help divert surface water to the drain pipe), and then backfill with dirt, which is compacted back to the appropriate grade.

What happened in this crazy third wall? The contractor (who we know, but who will remained unnamed in this article!) had broken out the concrete patio and kept the concrete on site. After doing the excavation, they backfilled the trench with the patio’s concrete and miscellaneous other construction trash. Then they put a layer of dirt on the top of their dump site.

What was the result here?

Well the contractor saved a lot of money by not properly removing the concrete and dumping other trash in the excavation. It also saved a lot of time. We know that for sure.

The result for the homeowner was not as positive. This left extremely unstable soil against the (supposedly fixed) foundation wall and created pockets where water could accumulate. (Large chunks of concrete is about the last thing you want around a foundation wall.) The end result was probably a wall that was worse off than when they started. This is why they had to hire us later to do the job right!

The point of this story is that some people will take shortcuts. It is highly likely the homeowner never even knew the other company did this.  We are pretty confident in saying the other reputable companies like Foundation 1 would not do this. (At least we don’t think they would.) But there are many others who will take shortcuts (things that are not even on the homeowners radar screen), and are normally selling on “little guy” pricing. Sometimes you get what you pay for.

In addition to feeling sorry for homeowner, who had obviously spent money on a shady contractor who did some shady things and did not solve their problem, it created some challenge for us as well. In addition to having to fish large concrete chunks and trash from up to 8 feet underground, we ultimately had to dig the trench about 3 times as wide as we normally do to get the trash out. It took a great deal longer for us that it normally would. We did this (at no extra cost to the customer), because unlike the other guy, we do things right. Our guys sleep well at night knowing we do the right thing for the customer.

Sometimes spending a few extra bucks on the job to work with someone you trust is money extremely well spent.

I could not have asked for a better experience. Everyone I spoke to or worked with at Foundation 1 was extremely friendly and professional. - Cheryl, Gardner

They exceeded the scope of work and were done on time. I was allowed to approve each stage of the process and felt like I was given excellent service. - George, Excelsior Springs